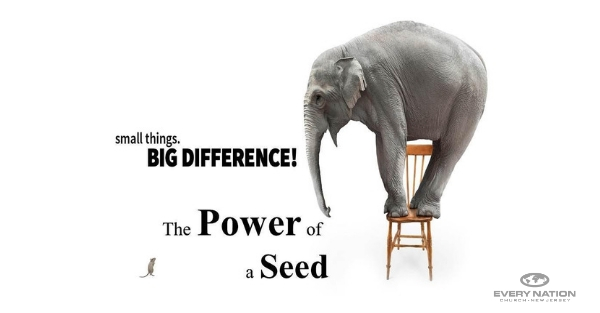 “For whoever has despised the day of small things shall rejoice……..”  Zechariah 4:10

“What is the kingdom of God like? And to what shall I compare it? It is like a grain of mustard seed that a man took and sowed in his garden, and it grew and became a tree, and the birds of the air made nests in its branches.”  Luke 13:18-19

Have you ever heard of a small computer company by the name of Apple? How about another small distribution company called Amazon? Of course you have! And if you haven’t, just ‘Google it’……….if you don’t know what Google is, I can’t help you! The amazing thing about these monstrous companies is that they both began in a garage. Small things can make a BIG difference.

Milton Wright brought his sons home a toy helicopter propelled by a rubber band. The kids were captivated at the sight of this object floating through the air. That small spark, would ignite a burning fire in these young boys to put a man into flight. Their names……Orville and Wilbur Wright of course. Small seeds can bring about BIG change.

YouTube started out as a small dating site. Ebay started out selling PEZ dispensers. Google began as a project to organize library books. Don’t despise small beginnings. The Bible tells of a man named Ananias in Acts chapter 9. He was compelled to pray for a man. That man was healed and soon afterwards baptized. That man’s name was Saul, who would later be known as Paul, the greatest missionary our faith has known. A small act had a BIG impact.  A woman named Rahab in Joshua chapter 2 would take a small step and help out the spies of Israel. God would use her small act of obedience to bring down the walls of Jericho and Rahab would later be in the lineage of Jesus. David was the overlooked shepherd boy keeping watch over his father’s “few” sheep. He would later become the greatest King Israel had ever known. And finally, Jesus the Christ would be put in the ground some 2000 years ago. A small seed, planted. On the third day, that seed would explode out of the ground and the world would never be the same. That one seed would multiply into: 12 disciples, that would later lead to 120 in an upper room, that would later lead into 3,000 on the Day of Pentecost, until today 2019 there are roughly 2.2 BILLION Christians on the planet!!

What small seed will you plant this Easter? Who will you invite to church? Statistics say 98% of Christians will never invite an unbeliever to church?! Oddly enough, they polled unchurched people and 82% said they’d go to church if someone invited them. Invite someone this Sunday, because SMALL SEEDS CAN MAKE A BIG DIFFERENCE!

Click here for a link to invite a friend!