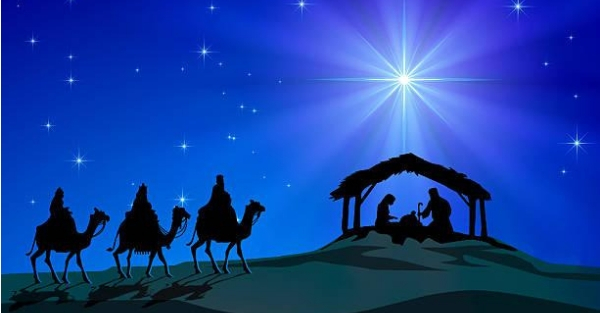 My neighborhood is a bit overzealous when it comes to holiday decorating. (Don’t get me started with bizarre Halloween decorations) Their front yards are filled with ten foot blow up Santa’s and enough Christmas lights to make Clark Griswold envious. Then there is my favorite, life sized sleigh and reindeer on rooftops! Seems like we are confused when it comes to ‘the reason for the season’, the birth of the Savior of the World! There are a few people that attempt to put Christ back in Christmas. I see the odd lawn with a nativity scene front and center, however, even then it gets confused. The usual characters are present: Mary, Joseph and the Baby Jesus, yet, somehow, Santa or sponge Bob will randomly show up on the scene as well!! They don’t belong. But before we are too hard on them, we must realize most Christians get it wrong by placing 3 characters that don’t belong….the 3 Wise Men:

“After listening to the king, they went on their way. And behold, the star that they had seen when it rose went before them until it came to rest over the place where the child was. When they saw the star, they rejoiced exceedingly with great joy. And going into the house they saw the child with Mary his mother, and they fell down and worshiped him. Then, opening their treasures, they offered him gifts, gold and frankincense and myrrh.”

The 3 Wise Men don’t appear at the manger scene when Jesus was born. They would arrive on the scene much later. Many believe Jesus was probably 1 or 2yrs old at the time. How amazing is it that they fell down and began to worship?! I’ve met a number of 2yr olds in my life, NEVER have I felt compelled to worship one of them. Another mistake we make is assuming there were 3 Wise Men. The Bible never says there were 3. We assume because of the three gifts they gave to Jesus: Gold, Frankincense and Myrrh. These gifts reveal much about the identity of this 2yr old child:

1] GOLD is the gift given to Kings or Gods. Queen of Sheba brought 120 talents of GOLD to King Solomon. When Aaron and the Jews thought Moses was gone, they made a GOLDEN calf to worship. Jesus is the one true King, in fact, He is the one born King of Kings.

2] FRANKINCENSE is the gift given to a priest. The men of the priesthood were required to have a distinct anointing oil that they were to apply on themselves. The predominant ingredient was frankincense. It was an aromatic resin that would fill the room with its fragrance. Jesus is our great High Priest and His fragrance should mark our life. The fragrance of life to some and the stench of death to others. (2 Cor 2:15-16)

3] MYRRH is a gum-like resin used to prepare the dead for burial (kind of a strange baby gift to receive!) Jesus was the one born to die on our behalf. Without the manger, the cross makes no sense. Jesus came to give His life a ransom for many. (Matthew 20:28)

Maybe you get your Christmas decorations, or the Nativity scene wrong. But you have to get the identity of that child in the manger right.

He is KING, PRIEST and SAVIOR!