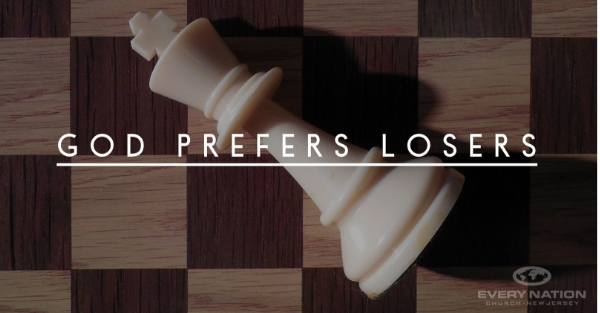 I believe this, and to be honest with you, I find that rather comforting.  It takes this weight off of me of having to perform to compare myself with others.

I read a quote by Bill Gates — for those of you who may not be familiar with him, he’s the founder of Microsoft. He said “Success is a lousy teacher. It makes smart people think they can’t lose.”

The problem lies in how you can begin to get way too comfortable.

What can happen far easier than people realize is you can begin to become a “Legend in your own mind.”

It’s not to say success is not something we can celebrate, but it’s about who gets the credit for it.

When I say God prefers losers what I mean is he prefers people who are aware of their own weaknesses. God wants people who seek him for help to overcome their weaknesses and are truly relying on God to open doors and empower them.

God loves to take the underdog, the loser, and raise them up and display his power through them. Think about it: how many of the heroes of the bible had major flaws in their character?

Look at Abraham who lied about Sarah being his wife to save his own skin, and Rahab who was a harlot, and David who was an adulterer and murderer, and all of the apostles who argued about who was the greatest.

You see, if God chose people who were not as flawed in their character, some of the credit would go to them.  By choosing flawed people with a sketchy past, God alone will get the glory when they do things in his power.

The Apostle Paul said it so well in 2 Corinthians 4:6-7

“For God ,who said, “Let light shine out of darkness” made his light shine in our hearts to give us the light of the knowledge of the glory of God through the face of Christ. But we have this treasure in jars of clay to show that this all surpassing power is from God and not from us.”

Just as physical light shined at creation, so spiritual light shines in the hearts of those who become new creations in Christ. The treasure is the glorious message of the gospel.

The word used for “jars of clay” refers to ordinary pots. These pots were used by common people to store grain or to keep oil for lighting their lamps. The Apostle Paul wanted to get that point across that these were just ordinary clay pots that were fragile and easily broken.

Sometimes we need a wakeup call to remember God formed the first man from the dust of the earth and we are made from that same clay. But this is where God places this treasure — in fragile jars of clay.

The contrast between the two is tremendous.

The gospel is like a precious diamond that shines brilliantly through us  To think this treasure has been entrusted to such fragile vessels!

Why did God do that?

In his wisdom the answer to that question is simple: so that we will be aware that this all surpassing power comes from God and not from us, and so that all the praise and glory will go to the Creator and not the creation.

That’s why God prefers losers. The less we are, the more he becomes to us. God prefers us when we are keenly aware of our weakness, seeing our own flaws, and are looking to him and crying out to him for help. And it’s in those moments he can reveal his unconditional love to us.

We always have to ask ourselves “Have I become too clever for my own good? Have I become so self-sufficient that I am relying more on myself than God?”

As we look to God for the answer to these questions, you can be confident that He will lovingly reveal it to you if that is the case. And be assured that as you repent and turn to him, in an instant you can become that humble vessel that God can empower and shine through.

2 Corinthians 4:6-7 For God, who said, “Let light shine in the darkness” made his light shine in our hearts to give us the light of the knowledge of the glory of God through the face of Christ. But we have this treasure in jars of clay to show that this all surpassing power is from God and not from us.