Home » The Blog » Fight The Good Fight of Faith: Show Up, Get Up, Gang Up

Fight The Good Fight of Faith: Show Up, Get Up, Gang Up 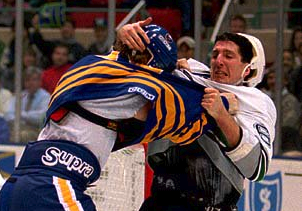 Fight the good fight of the faith. Take hold of the eternal life to which you were called and about which you made the good confession in the presence of many witnesses. 1Timothy 6:12

Hockey is a unique sport in that fighting is a real part of the game. I’ve been in my fair share of fights over my playing career, in fact, I found a website that catalogs hockey fights. Apparently, I’ve had 92 FIGHTS! Before you go thinking I was tough, the website also said I only won 7!! lol. While I may not have won a lot, I did learn a lot. Much of what I’ve learned has helped me greatly in ‘fighting the good fight of faith’.

Here are 3 quick lessons I learned the hard way:

1) “SHOW UP”: In this fight, I fought Detroit Red Wings tough guy Darren McCarty: https://youtu.be/OgMlc5fz6KY. Darren is much tougher than I am, but I’ve learned that when you have the courage to fight — even when you’re outgunned or outnumbered, you can earn the respect of men and the applause of heaven. David was a young shepherd boy. He had the courage to stand before Goliath. He dropped the giant and inspired a nation. Stephen, the church’s first martyr had the courage to stand before an angry mob opposing the gospel and though he lost his life, it wasn’t before he saw the heavens opened and the Son of God STANDING at the right hand of the Father! I believe he received the applause of heaven. God is searching for those that will take a stand for Him in the earth.
“For the eyes of the LORD run to and fro throughout the whole earth, to give strong support to those whose heart is blameless toward him” (2 Chronicles 16:9)

2) GET UP: I fought Cam Neely of the Boston Bruins 2 or 3 times in one game: https://youtu.be/tg1IbMC4T14. I realized after this night, whether in hockey or the Christian life, ‘WHOEVER GETS UP THE MOST WINS!’ There will be times in the Christian life when we fail, fall short or just get worked! How will you respond? Jesus, our example, and hero took deaths knockout blow on the cross. But because HE got up, we now have the power to get up to. When you sin, repent, and get back up and into the fight of faith. “For the righteous falls seven times and rises again, but the wicked stumble in times of calamity.” (Proverbs 24:16)

3) GANG UP: Back in 2000 I was playing for Philadelphia against the Toronto Maple Leafs. The game got a bit out of hand when an all-out brawl broke loose. I was paired up with a young guy Thomas Kaberle (not known as a fighter). I was going to have my way with him when suddenly renowned tough guy, Tie Domi, jumped in to help Thomas and the 2 of them beat the mess out of me: https://youtu.be/AXSYnfgHD3Y.

You need to hear me on this one. You don’t need to FIGHT FAIR in the fight of faith!! If you are getting ‘worked’ in your spiritual life, losing to sin over and over again, GANG UP ON IT!! Call in some other believers to gang up on sin! Ask them to believe with you, to pray with you, and to encourage you. We are better together!

“And though a man might prevail against one who is alone, two will withstand him-a threefold cord is not quickly broken.” (Ecclesiastes 4:12)